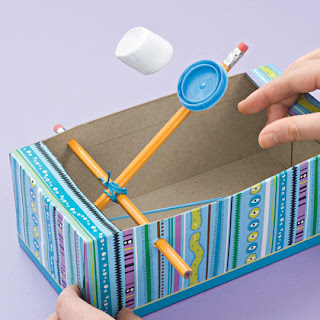 We made these this weekend. And well all I can say is FUN FUN FUN! But DO NOT make them in the evening, while it is raining outside. The catapultees (Is that even a word? Catapult shooters maybe?) will want to use them ASAP and well like I said do not make them when the kids can't take them outside.
Now if you happen to have two dogs like mine, that like marshmallows, this may not be a problem. But I don't recommend marshmallows for dogs. Now my dogs did eat a few, and they don't seem to have been harmed by them. But I still wouldn't recommend it. p.s. I limited the kids to only 2-3 marshmallows each in the house to make sure they retrieved the ones they shot. Before the dogs got them. ;) But the dogs are quick and they caught on to the game pretty fast.
So we made these catapults. It was pretty easy. All you need are 2 pencils, a milk or Gatorade cap, 2 rubber bands, scissors, 1/2 a pipe cleaner, scotch tape and an empty tissue box. Oh and of course a bag of large marshmallows. For me the hardest part was waiting until I had 4 empty tissue boxes - one for each of us, 'cause well, mom wanted to play too. And well it always helps to have a demo model to learn form and make mistakes on. :)
The assembly of them took about 30 minutes. Ok probably closer to 10 minutes per catapult, but I was putting mine together and helping everyone else at the same time. It does help to have a buddy when you need to tie the pencils together, but other than that it was easy peazy.
And the fun and laughter than ensued was totally worth having marshmallows shot all over my house. Ok I made them keep it downstairs, so the war stayed mostly on the tile. Think kids chasing each other shooting marshmallows, while dogs chase kids and bark. Kids collapsing on the chairs from laughter or returning to the kitchen to made adjustments and then testing them on mom. We easily spent 2 hours messing around with these things and both my girls took theirs to their room for safe keeping for more fun tomorrow.
My son killed his. Actually he declared them lame because they don't exactly shoot straight, more like they shoot down, but if you tilt the front up you can get some decent distance. Hey it's a tissue box, pencils and rubber bands. It's not high tech.

WOW my two little boys would LOVE these--hahah! I can't wait to show them the marshmallow catapult! hahah!
BRILLIANT! Thank you for sharing!

Just saw this on Pinterest. Looks like fun, my son will love it! Thanks for the idea!

Just saw this on Pinterest. Looks like fun, my son will love it! Thanks for the idea.

I just called my daughter to come to the computer. She can hardly wait to make this cool catapult now! Thanks.